To complete the third delivery, we have to analyze the behavior of our building during the day and during the year. We made some changes from second delivery. Actually, we have just one building situated on west side of the area of project.. The building turns according to Viale Trastevere, an important street next to the area, and gradually becames lower, according to the slope of the zone.

We have analyzed this first situation:

From this, we can note how important is the presence of our building in its context. In fact the building creates a sort of square ,by its form, and it is possible to see that the building itself protects this space during the hottest hours of summer, like in the previous delivery.

In following steps, we have analyzed just the east face which has a series of protruding square that come out from the face itself

Meanwhile, we focused on 21/06 and 21/12. From the first analysis (in summer) we can study the way in which the east face is shaded. On this side, the protruding squares has not a significative effect. On other hand, to reduce the strength of the sun, we thought to put some trees along the border of the area, but we can see from the follower image that, actually, the trees can't stop in a effective way the solar radiation. For the future of our project, we have to remember this aspect. We can act in two ways. First, we can increase the number of the trees or, second, we can put another kind of trees. For example we could think about plane trees, which present a large foliage and which are widespread in Rome, in particular along the river Tevere (not very far from our buiding). This second way can be better but presents a little defect. In fact, to reduce the total cost of the project, surely we will put in our square just young trees, which are too small to have a strong impact in a short time. So we have to wait the trees grow up to have a comfortable squares. During the winter we can see how there is a lot of space in shadows on east face, generated by the protruding squares.

To understand the behavior of the east face during the whole year, we made a cumulative analysis. We can note that there are a lot of cold points on east face. In this points, we think that surely will be some important problems caused by moisture and mold. To solve this problem, we can reduce the projection of the squares or we can create a breezy facade. Again, the behavior of the lower part (th connection to the ground)of our building is very important. In fact, in this analysis, it is totally represented like a cold part.

We supposed that the east face of every protruding sqaures is made by glass, so we decided to analyzed it. It is possible to note how there is a different intensity of the radiation according to the orientation of the squares. If we want to obtain the best, we need to add some brise soleil on most radated square and we need to have some particular kind of glass in other squares, for a low emissivity.

We studied the behavior of the coverage too, on which there is no more some level in a different height but a simple surface which could be moved by a series of pockets with some balconies or windows. It is possible to understand that this surface is the most radiated, because of its exposure on south. The follower image confirms this. We could use on this face a brise soleil system too.

We analyzed west face too. On this face, we want to insert some large windows, that include the whole main room of the accomodations. For this last, we choose this side especially to promote the evening light. In fact our building wants to serve a particular kind of people like professionist or students,which will spend a lot of time outside or in common spaces, which are located on east face.

From this analysis, we can understand how the face is radiated (very strong on last part).

We are thinking about a brise soleil system for this face, like on coverage.

We said that we are thinking about a series of large windows on this face. Now, there is not something of sure but to understand the behavior of this, we made a numeric analysis.

From this image, we note that our windows not change in a significative way the behavior of the whole west face.

We analyzed the ground floor too, which can will be empty for a lot of space.

By this images, we understand that there is a lot of cold surfaces. We are thinking about a system through which we can avoid some mold or moisture.

Actually, we thought to turn a little the surfaces, like in follower image.

In the end, we measured the horizontal surface.. Actually there is 6700 mq. This is not good because we are using too surface but from this number we have to steal the open spaces on coverage, some spaces generated by Raumplaum system and the space generated by the loft located at lower and higher floor.

One of the main changes that we made since last time is the decrease of our protruding volumes, because the last version created too much shadow on facade. This aspect could encourage the development of mold and moisture stains, conditioning the aesthetic value and the healthiness of this building. Here, we report an image of last version of our east facade:

After this recent setting, we have analyzed the details of the facade. In particular, we analyzed the main glass surfaces, according to their disposition in the three part of facade. So we analyzed three windows. This kind of analysis can help us to understand in which cases we can set the frame on flush outer or just 10 cm behind it. The next image can help you to understand the windows anayzed:

Now, let's show you our results.

1_The first case report the results about a window which is located in south part of our building (blue window in previous image), but which is orientated on north-east:

As we can see, precisely because of its orientation the window has too low values of solar radiation. If we decide to use it in this way, we have to use a particular kind of glass which could have an important impact on total budget. In this case, we thought to set the frame on flush outer and to turn our glass surface on south east. In next image we report the results of this last setting:

2_The second example tells us about a window located in the central part of the building, almost perfectly orientated on east:

As we can see in the previous picture, we have a good range of values. For this reason, this window may not undergo significant changes.

3_The third and last exmple is about an other window which is almost prfectly orientated on east, but which is located in north part of the project. In this case too we have some good values. However we wanted to try a new disposition, just to understand how significant can be a frame which is located just 10 cms inside the protruding volume. The next two images show us the original situation (a) and the new setting of the frame (b):

Now, we are going to analyze the west facade

In the previous stage, this facade had not yet been the subject of a thorough study, but now it has its own uniform, moved by deep openings:

Just this openings were the subject of further analysis:

As we can see from previous picture, this openings can create an interesting design, but on other hand if we look at the project in an energetic prospective, this openings generate an important problem. In fact, a part of the holing on south (your right), all others will be irradiated only by the sun which are going down on west. Such radiation is not sufficient to energy purposes. Back here the problem of the development of mold and moisture stains. To solve this problem, we must pay close attention during the project of the pack wall and during its realization too, to avoid thermal bridges and other perspiration problems.

We could also think about a ventilated facade inside the openings, but we have no much height space and there is an orizontal barrier on our holing. So this system might not have an important result.

During the debate of the project, we thought to decrease the depth of these openings.

In the follower image, we report the results of the decrease from 6.4m to 4m:

From the comprison beetween the two situation, we can note how the change described above has an impact close to zero. Therefore, most likely this strategy will not be implemented, because this changes alters the structure and the internal configuration in a significant way, without bringing an important improvement.

Here we report a render about east facade with internal square and its shadows:

The analysis of shadows is set to 11:00 on the winter solstice. As we see, the area is shaded by an adjoining building on which we can not intervene. This shadow doesn't allow a good livability on square during the winter. However, it does not create any problem for the sunshine of the east facade of the building. 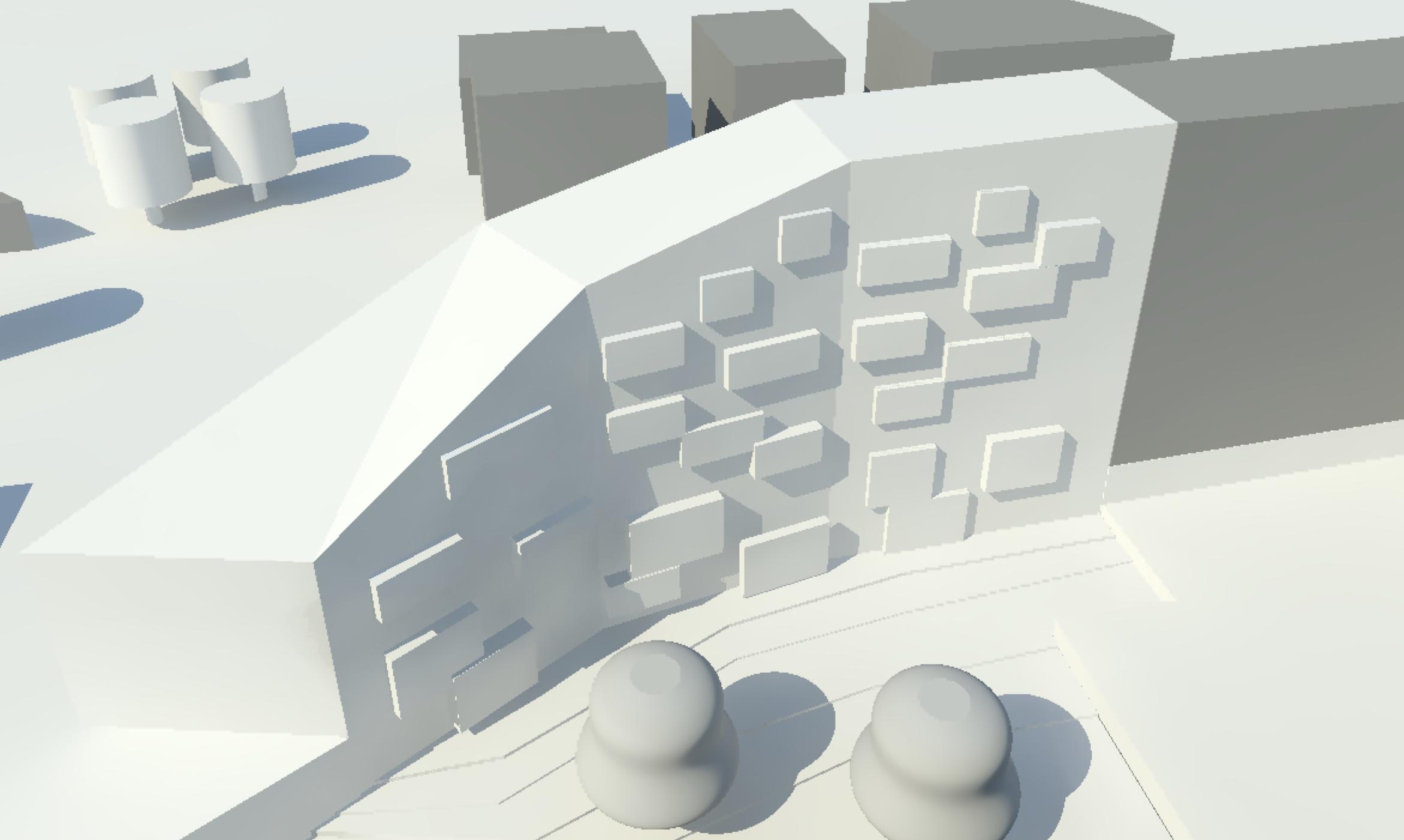