The project is situated in a triangular area near the "Roma Trastevere" station,on the intersection between Via degli Orti di Cesare, Viale Trastevere and Circonvallazione Gianicolense.

the more caracteristic aspect of this area is its  difference in level,in fact we've a vertical drop of 7 mt approximately on the middle of the area.

for this reason we decided to manage the drop with the creation of two volumes,one is a long and  low building that follow the drowing of the street,the second one start at - 7.00 mt so we decided to create a octagonal tower of 14 floors that we can connect with the first building by a sort of bridge

we've also studied two important thing:the solar radiation (of the surfaces of the building and of the area) and the shading.that the building reflect on the project area and on the building close to it.

We can first observe the solar radiation on the area in two different moment:

By the observation of the winter solar study we can say that the main front of the project (on Viale Trastevere) is quite hot but is an acceptable range,and is quite good for the life inside,the other front of the system is the cooler one specially on the northern part.

By the observation of theese pictures we can say that the main road (Viale Trastevere) is always stricken by the sun and the edifices don't interfere with it,but contrarwise we can observe that the cooler part of the area is the  north-eastern part behind the main front of the street. But the coolest part is concentrated near the basament of the tower.

The intersting reflaction that we can make by the observation of the two solar studies is that both in winter and summer the main front have an acceptable range of temperature and the other front is the cooler,but we can say that in both situation is acceptable and is not a real problem at all,we had alredy tought this in the preliminar phase of the project.

We've also observed the project without the contest to see the solar radiation on the individual facades of the building:.

In winter time as we can see the edifices have a really good solar radiation,only in the northern facade we can see a cooler spectrum but this is not really strange and we can considerate this acceptable.

We can observe a similar situation in summer time only the intensity of the spectrum infact is changed,but this is normal because of the different radiation that we've on the summer time.

In conclusion we've also analized the shade of the area with the project and the results are quite good as we had imagined.

we've analized the area at 12:30 on the summer and winter solstice and during the equinoxes:

as we see in the project area we don't have a bad shading,in fact on summer the area is good shaded on the pubblic spaces and not to sunny,same as on the equinoxes.

The only moment of the year where the area is all obscured by the edifices is on the winter solstice,but this situation was predictable because of the lower position of the sun in this part of the year. 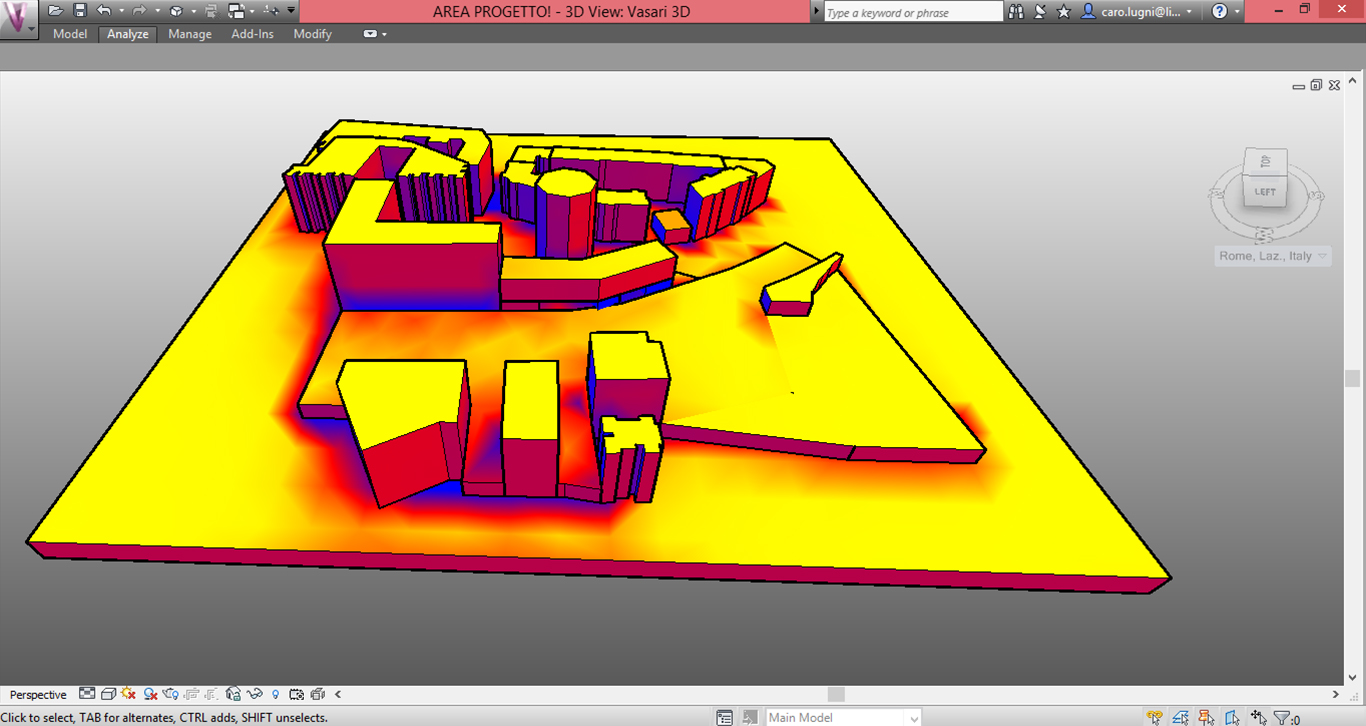