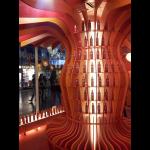 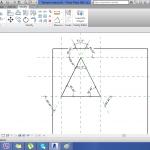 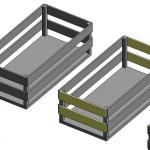 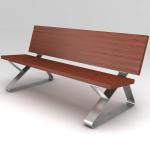 I have create with Revit the bench designed in the picture above. First of all i studied the pieces that compose it, two hiron structure that are the base of the bench, the overstructure in wood and the bolts that hold the all. I created one family for each piece [ FILE-NEW-FAMILY-METRIC GENERIC MODEL FACE BASE ]. I decide the face view according to the function tha the object will have.

First of all I put the correct project units [ MANAGE-PROJECT UNITS ] and according to the dimention of the piece i put the project units. For example for the bolts I used millimeters meanwhile for the  wood sticks I used meters.

Than I draw the REFERENCE PLANE to define the borders of my object. I used the coomand ALIGNED DIMENSION To mesure and set the lenght between the planes.

After I set the referenc plane I added the parameter using the command FAMILY TAPES. I created a list of parameters than I assigned each parameter a dimension.

I essagned the parameter cliking on the dimension and choose the correct one.

After delimitated all the dimension and  the thicknesses of the piece I extruded the surface [ CREATE-EXTRUSION ]. I changed view and i used the front view to adjusted the lenght of the ectrusion creating another reference planeI.

But I used a different command to create the bolts holes. I used the command VOID EXTRUSION drawing a circle on the hiron structure.

Finished each family( for each part) I created the mother family in order to combine all the components. I used the command [ INSERT- LOAD FAMILY (I searched the family that i want to import ). Than CREATE-PLACE COMPONENT (and i select the reference surface). To place the component in the correct position i uesd the command MOVE. 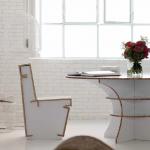 I decided to design the table shown in the headline picture. It's a table built in cardboard's pieces assembled interlocking.

I created a folder on my desktop in order to have all the pieces of my table in one place.

I started to design the table opening a new family, this family will be my "Tavolo - famiglia madre" (table - mother family). This is the main file where i'll be assembling all the pieces of the object. I opened the new family, and choose GENERIC METRIC MODEL.

First of all I changed the units of the file in in meters. It's important to set the dimension of the object parametrically. In order to do so I used the command REFERENCE PLANE, (p.1) and locked the dimension. I did so in the plant and front view. (p.1 p.2)

After I set theReference pPlane I added the parameter using the command FAMILY TYPES. (p.3) With this command I was able to create parameter to assign to each dimension. When I create the parameters e.g. lunghezza, profondità their value was 0.00 that's because they weren't assigned to any object. After they were assigned to an object the value changed (p.4)

After this I saved my document in the folder "Table". Every object in the folder will be named "Tavolo - x" in order to have everything organized and the metadata well defined.

I'll explain the constroctruction of only one of this pieces (Tavolo - Ripiano) since the modus operandi is always the same.

After this my drawing of this part is complete. (p.8)

It's important to say that in order to design the joints of the legs and the crutch (p9, p.10) I used the command VOID EXTRUSION. This allowed me to subtract matter to the main object and create a void.

After this I opened again my mother family in order to combined all the pieces of the table. The shelf is glued to the legs of the tabels. The legs are held togheter by the crutch that are interlocked. I used the command LOAD FAMILY and then PLACE COMPONENT in order to virtually build the table.